from Milan to Moscow, from Paris to Munich and Venice

After the first showings in his house atelier, an attempt at a “traveling exhibit” in the city, “advised against” by the institutions, and an open-air display in the outskirts of Turin near his family home, Filippo Avalle receives his exhibition baptism at the age of 22 with his participation in the collective “Linee della giovane arte torinese” (Young art in Turin) sponsored by the Istituto San Paolo in 1969. Today a part of this itinerary can be viewed, in over 100 works, in the House Museum in Brienno on Lake Como.

During a solo exhibition at the Centro culturale Rizzoli where his wife Helma works, directed by Vittoria Piazzoni Marinetti, Avalle draws up, together with Giovanni Bottiroli the Manifesto per una ripresa rivoluzionaria dell’arte (Manifesto for a revolutionary revival of art), 1974.

Guido Le Noci, owner of the historic Galleria Apollinaire, sees it and decides to officially present Avalle to the Milanese artistic scene: he sponsors an exhibition of one of his great artworks, that lasts over a year, and a book, written with Bottiroli: Helma Opera Labirinto (Helma Labyrinth Artwork).

The newly born Philippe Daverio Gallery discovers the work of Avalle through Luisa Cogliati Arano, a Leonardo scholar, and inaugurates the artist’s first solo exhibition in 1976. The introduction to the catalog is by the cofounder of the gallery (Paolo Baldacci), which had just opened in Via Montenapoleone with an exhibition dedicated to the glass works of design icon Brionvega. The latter will later sustain a solo exhibition of Avalle’s work at Palazzo Citterio.

The following year sees Avalle protagonist in Paris and Duisburg. A long fruitful collaboration begins with Philippe Daverio and Paolo Baldacci, aided by the support of Cristina Pariset for public relations, establishing a lifelong relationship based on friendship and trust. 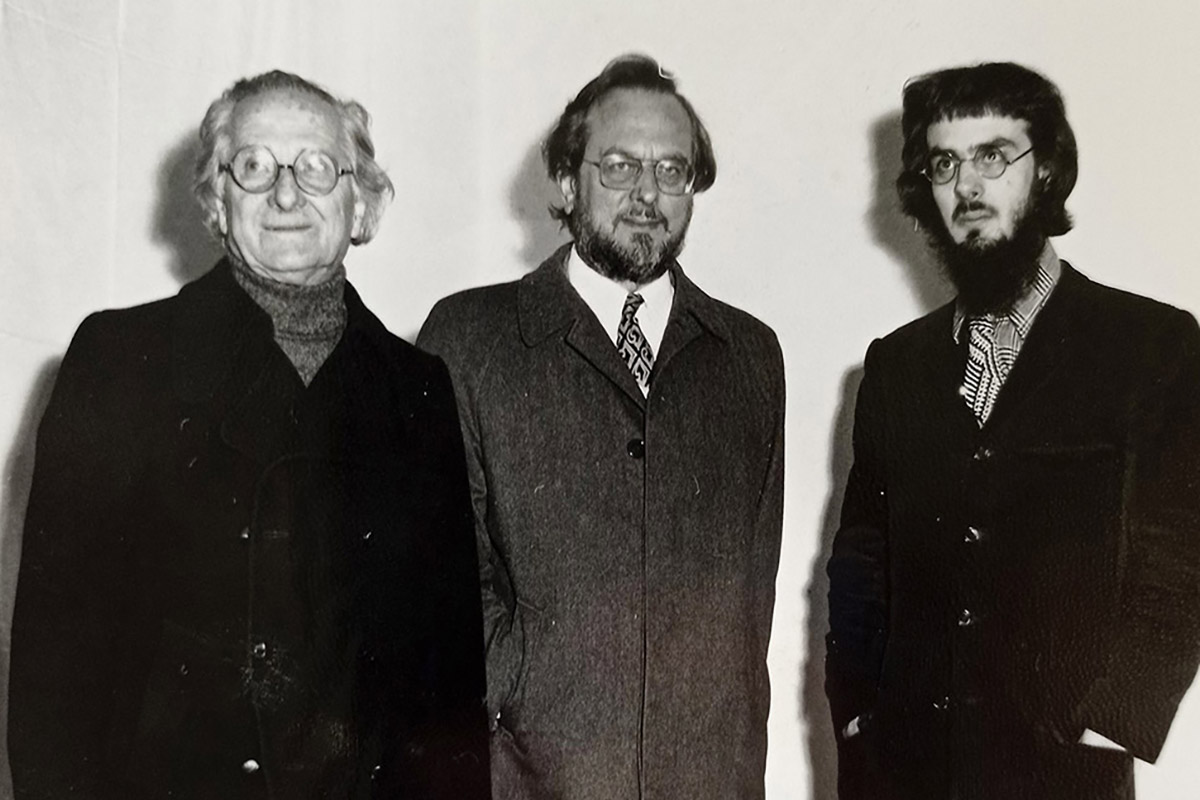 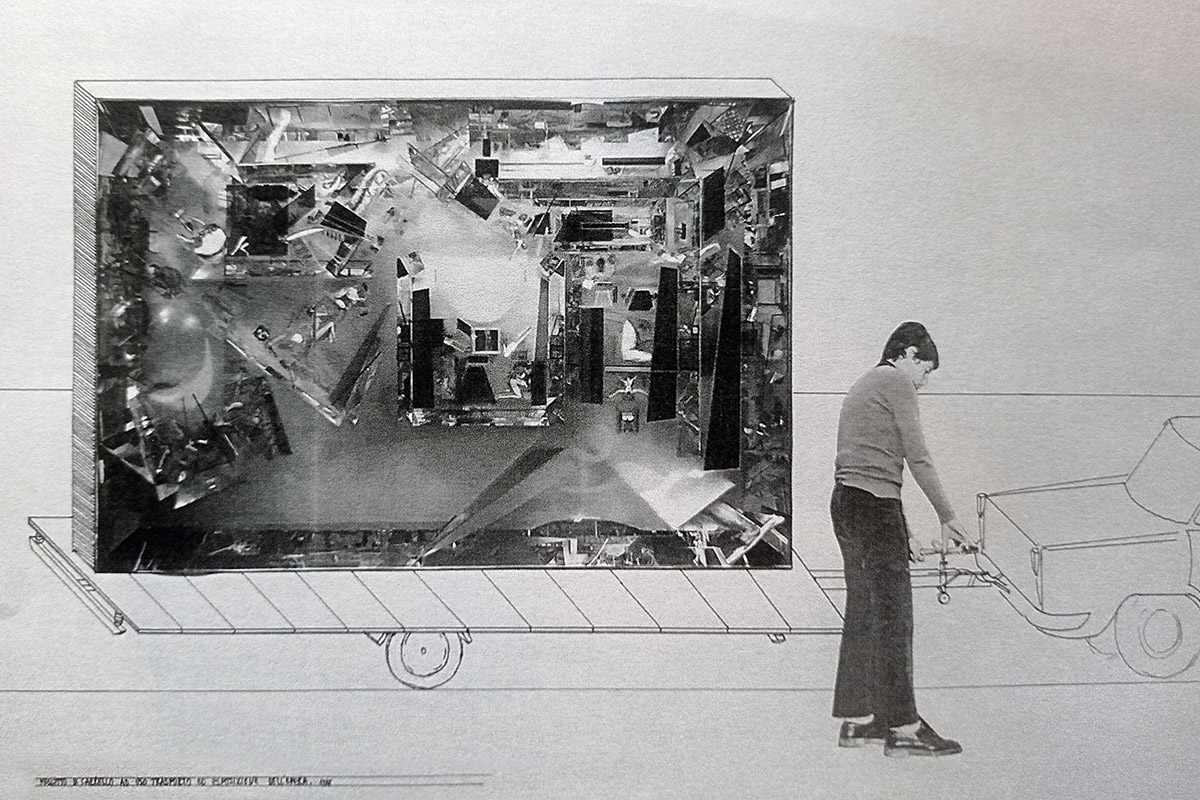 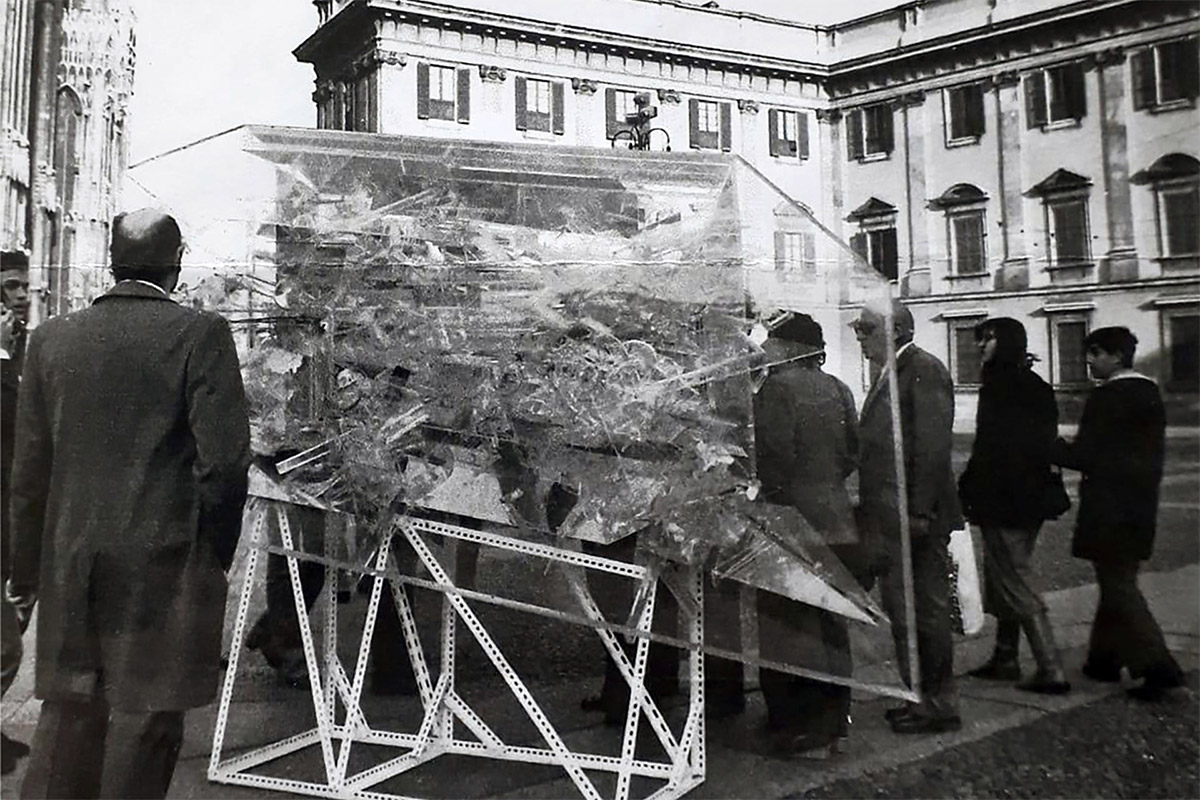 International exposure becomes more prominent. After a brief episode for “Promozione Italia” (Promote Italy) in Montréal, Avalle goes back to showing his work in Munich, Germany and later in Lyon, France on invitation by the art historian Vittorio Fagone. Armin Zweite and Dieter Ronte are among the curators of the exhibition Aktuell 1983 in Munich. Just a year prior, he is one of the featured artists of the fortieth Esposizione Internazionale d’Arte in Venice.

Milan also further opens its doors: the piece Incendio a Beaubourg (Fire at Beaubourg) had already attained an unprecedented open-air space between the Duomo and the Palazzo Reale, but the year 1981 marks a pivotal “event”.
Carlo Bertelli, Superintendent of the Brera Art Gallery, Palazzo Citterio, at the time under construction, hosts an evocative solo exhibition of works in plexiglas, drawings and electronic music that accompanies visitors through the various rooms. The highlights of the itinerary are La Feroce (The Ferocious) and the preparatory drawing for Atlanta Opus Epicum, a gigantic human figure, later realized in layers of plexiglas. The drawing, fruit of anatomical studies, is also shown at the exhibition on the Island of S. Servolo in Venice for the European School of Oncology, thanks to Alberto Costa and Umberto Veronesi.

In the Eighties, relations intensify with Turin from where Avalle first started (he is shown at the Giancarlo Salzano Gallery as well as the French cultural center) and Como, where he then moves to, choosing to unite once again house and atelier in Brienno. On Lake Como, the Galleria d’Arte il Salotto exhibits his work on multiple occasions and dedicates the first website to him. Over the years, Avalle participates in other events, like Miniartextil and a solo exhibition at Villa Erba in Cernobbio.

The business world also begins to favor exhibitions of commissioned works. In 1988, Castek installs in its Milan branch Avalle’s “company portrait” Technopolis, commissioned by Fabio Castelli, owner of the holding company.
At the CERN in Geneva, Avalle achieves his first architectural feat with a tensile structure for the Visitor’s Center.
During the same period, the relationship with the Credito Valtellinese is consolidated, thanks to the mediation of Fernando Gianesini. This gives way to a series of solo exhibitions in Sondrio, Como and Milan with a splendid monograph curated by Franco Monteforte and published by Vanni Scheiwiller in 1990. 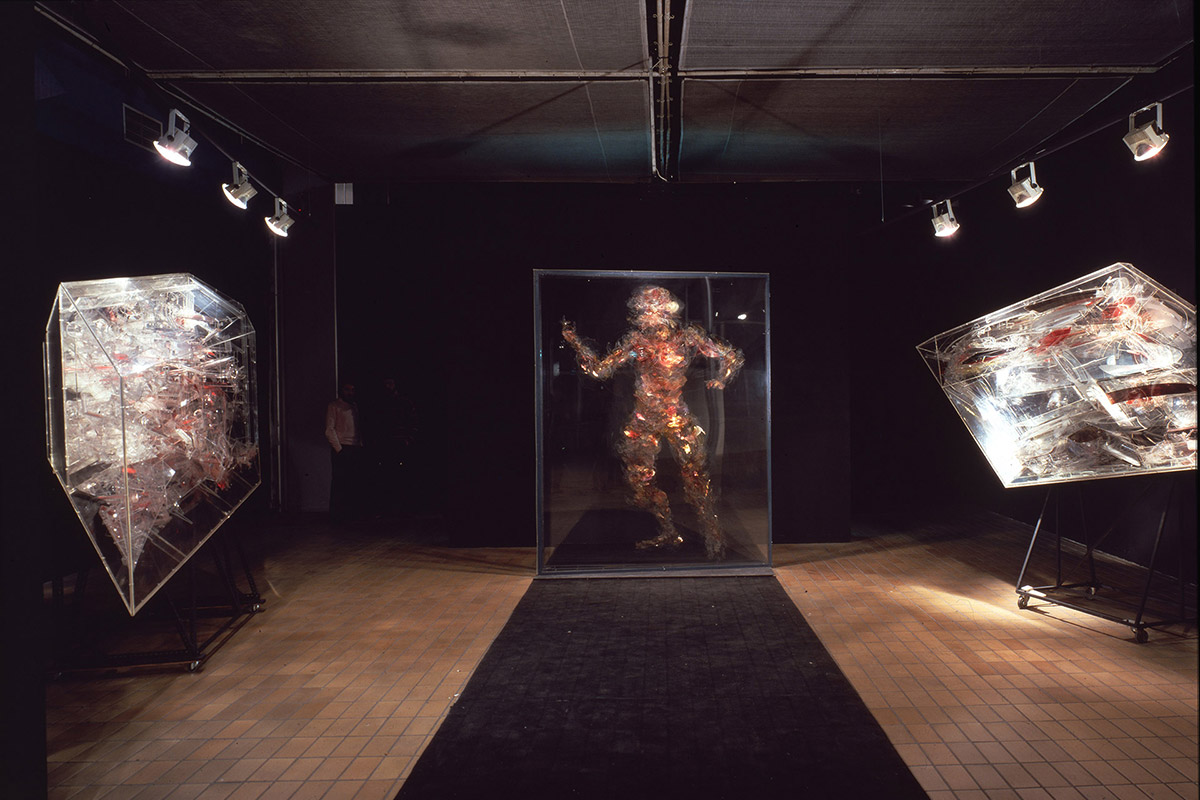 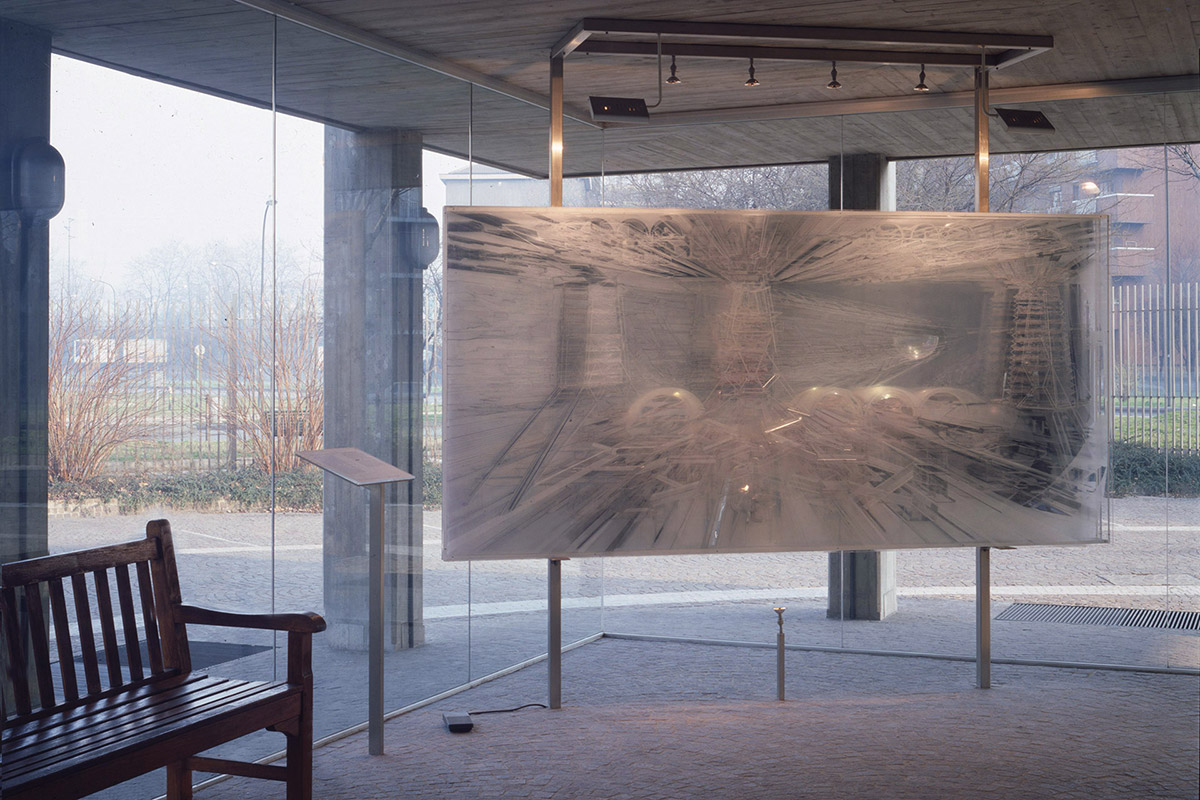 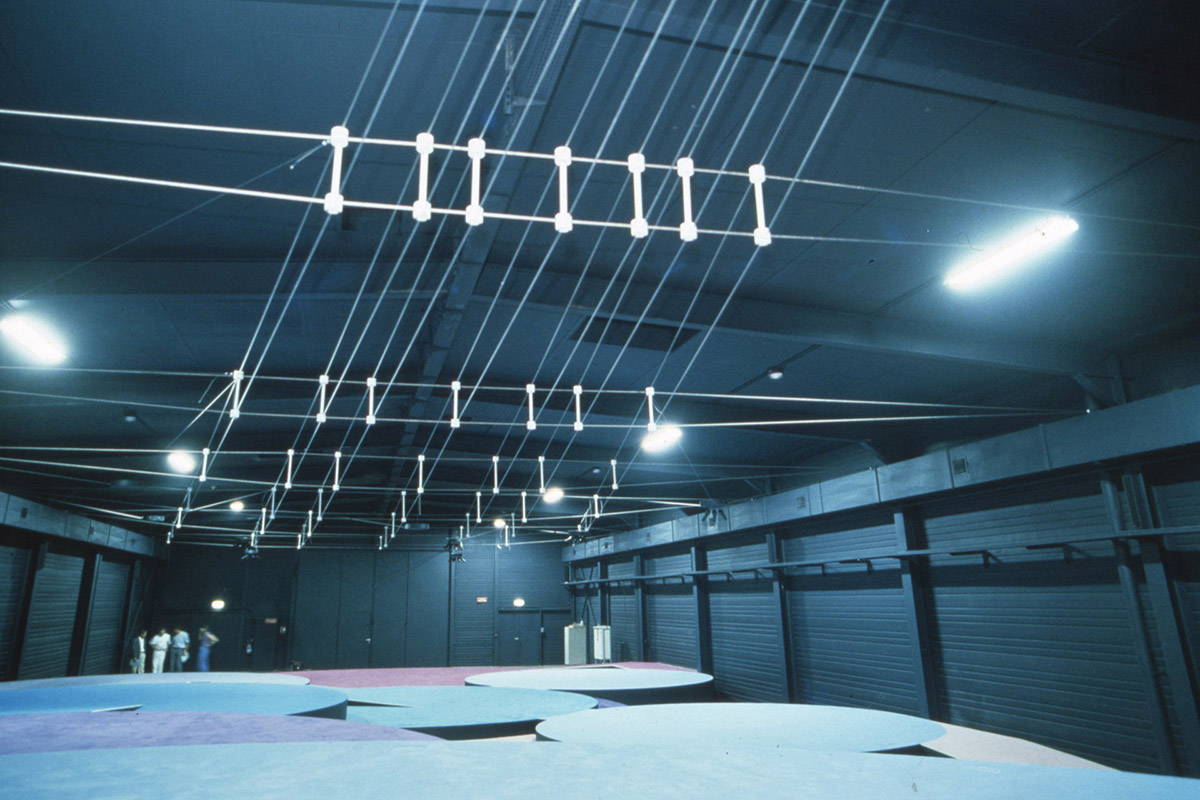 In 1991, following his return from a collective exhibition in Capo D’Orlando (Sicily), the artist presents a retrospective at Residenza San Damiano, in the heart of Milan; in the same year at the Museo d’Arte Moderna in Bolzano he participates in the “Tribute to Ezra Pound”, with an “olotratto” of the poet that is also shown at the Palazzo Bagatti Valsecchi, in Milan. While for the “olotratto” of Eugenio Montale, the active role of the Biblioteca Universitaria of Pavia and the Magazzini del Sale of Siena are decisive.

While in Milan he is sparking the interest of Studio Gastaldelli, other exhibitions of his work are being organized in Holland, thanks to the mediation of artist Jurrien Strelitski, with whom Avalle establishes a friendship, strengthened by their parallel artistic research: they will be together again at ESTEC (European Space and Technology Centre) in Noordwijk.

In 1996-97, thanks also to the efforts of ValenteArtecontemporanea of Finale Ligure, Avalle is shown at the International art fairs of Bologna, Milan, Turin, Zurich, Cologne and Frankfurt.

His work is present in various galleries in Italy and he is selected for an exhibition on art in the Nineties at the Biblioteca Braidense.

In the same period, he completes the Obelisco Solare (Solar Obelisk) for Costa Allegra: after a “horizontal” exhibition in his atelier in Brienno and the epic transportation of the structure for its placement in the entrance hall of the cruise ship, the Milanese galleries Studio D’Ars and Studio Lattuada, along with Parma’s Galleria Alphacentauri, document the artistic and architectural work conducted by Avalle and architect Guido Canali. 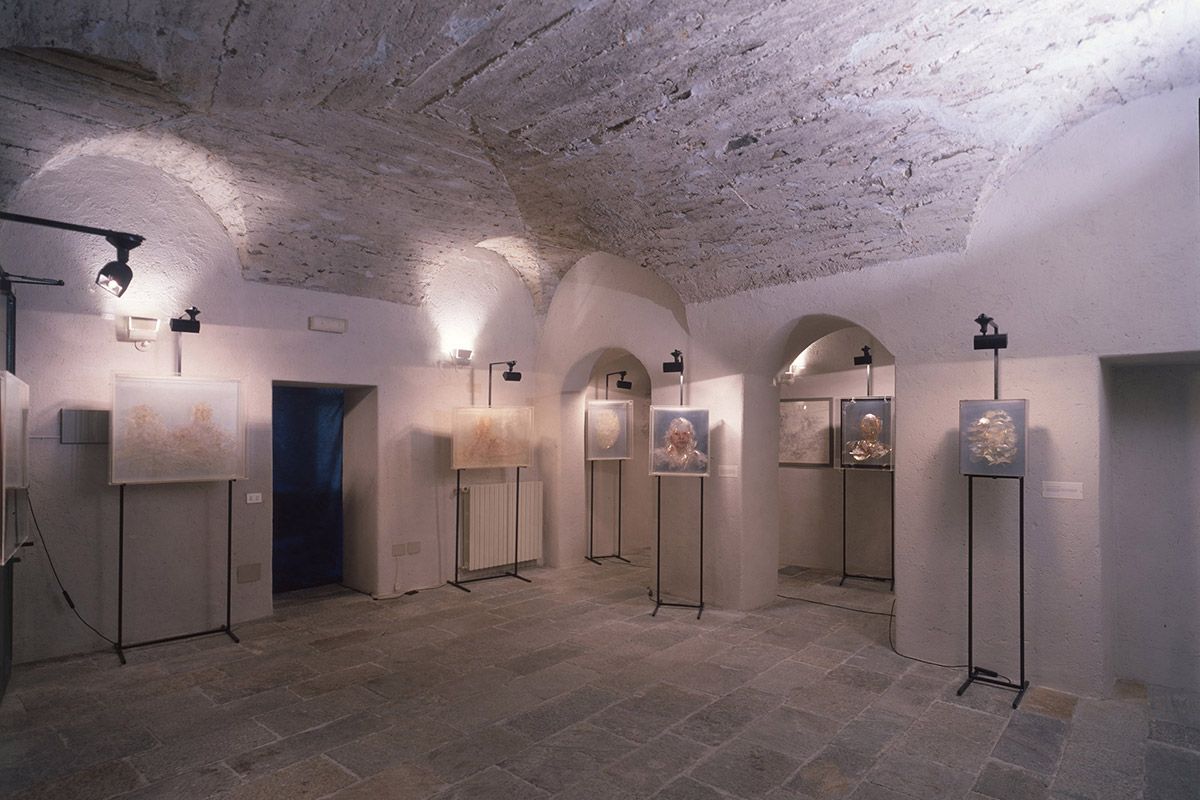 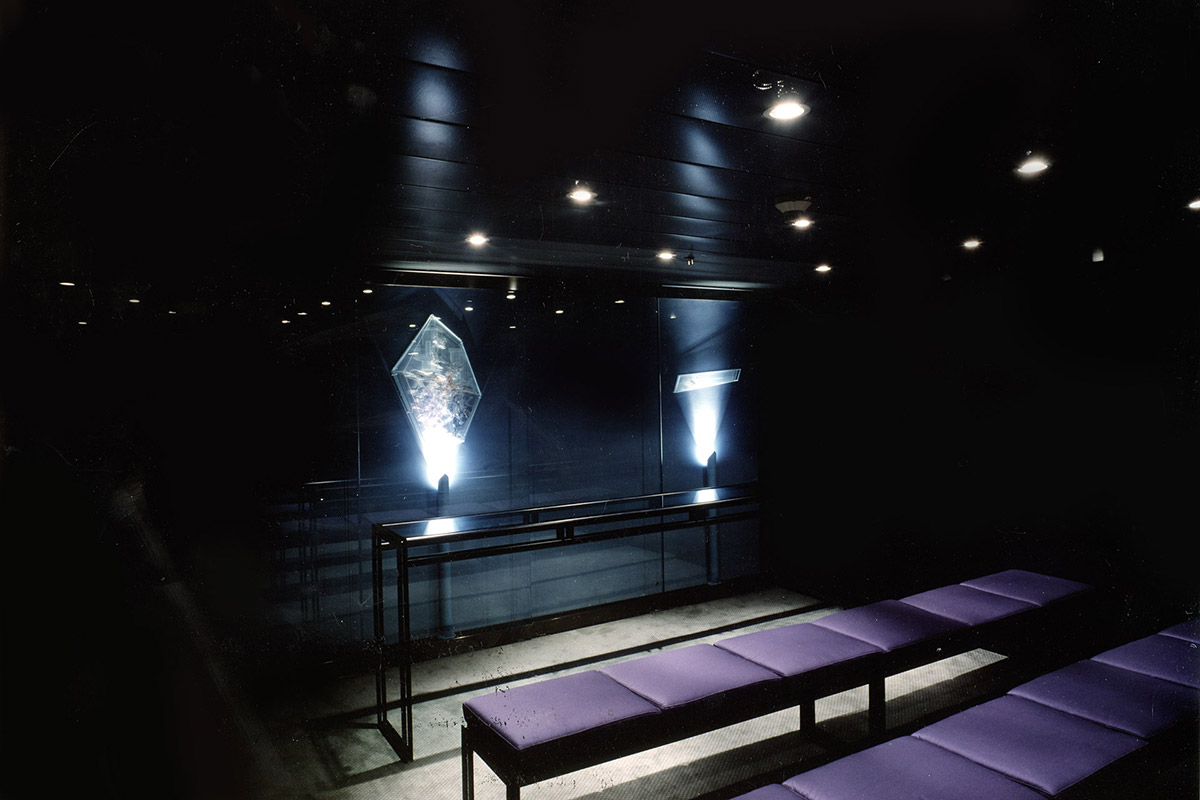 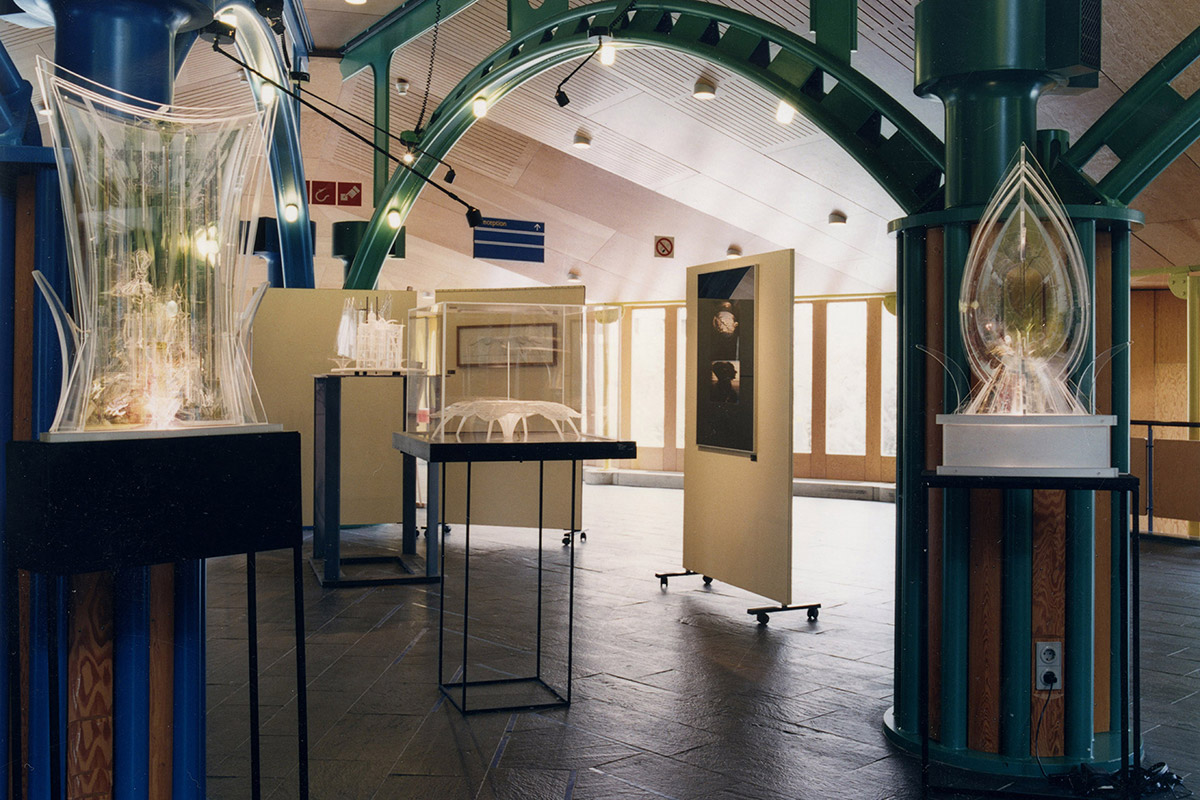 The Year Two Thousand and…

After taking part in an exhibition on “Utopie metropolitane” (Metropolitan Utopias) sponsored by the Politecnico in Milan, in the year 2000 Avalle participates, together with engineer Mario Dotti, in the International Competition Milan 2001-III° Millennium with the scale model for a project entitled Oasi, a luminous installation conceived for the piazza of the Central Station in Milan. The project will remain a metropolitan utopia, but Avalle does not lose heart.

Rugiada (Dew), a large sculpture in fiber optics and plexiglas, brings Avalle for the first time to Moscow, for the placement of the piece in the store Italmoda. In parallel, he completes La colonna delle stelle marine (The column of starfish) for the Museo di Arte Moderna in Pescara .

The MART in Rovereto shows in 2005 Helma Opera Labirinto (Helma Labyrinth Artwork) within the exhibition Un secolo di arte italiana (A century of Italian art); the following year another collective exhibition is held in Karlsruhe.

While his participation continues in the major art fairs in Milan and Bologna thanks to Valenteartecontemporanea and Studio Lattuada, Avalle carries on with his commissioned works: in addition to his impressive piece entitled Via Crucis for the Church in Montegrosso d’Asti, his Ultima Cena (Last Supper), commissioned by the Fondazione del Credito Valtellinese is first put on exhibit at the Palazzo delle Stelline in Milan and later installed in the historic Hotel della Posta in Sondrio.

In 2009 a return to his origins: Avalle is invited for a retrospective – curated with passion and expertise by Federica Armiraglio – at the MAP (Museo di Arte Plastica), already housing the Centro Polimero Arte, where he had discovered the potential of “his” plexiglass, and at the Castello di Monteruzzo in Castiglione Olona (Varese).

The exhibition “Leonardo. Il genio, il mito” (Leonard. The genius, the legend) at the Reggia di Venaria Reale (Turin) welcomes Avalle’s Ultima Cena (Last Supper) that will make other stops, the last in the collective “Last Supper Recall” in Milan, conceived by Philippe Daverio and later carried on by Flavio Caroli with the sponsorship of the Credito Valtellinese and curated by Leo Guerra. 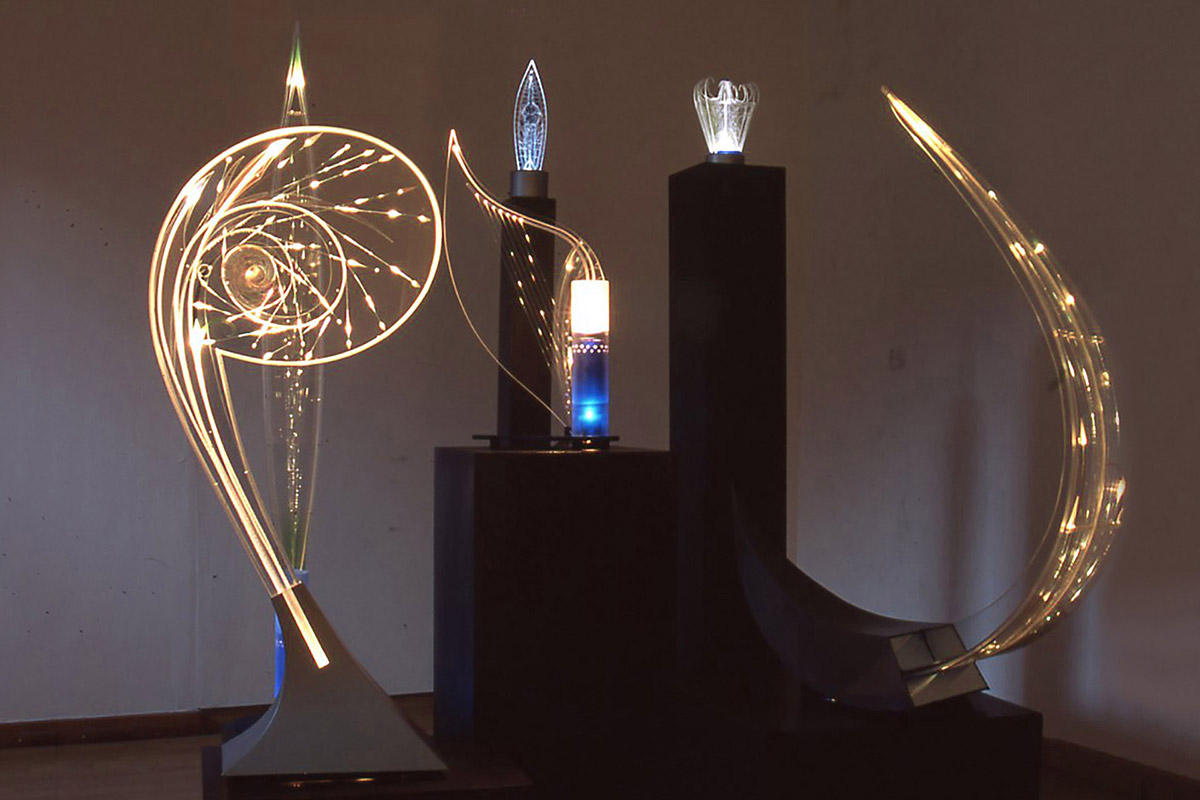 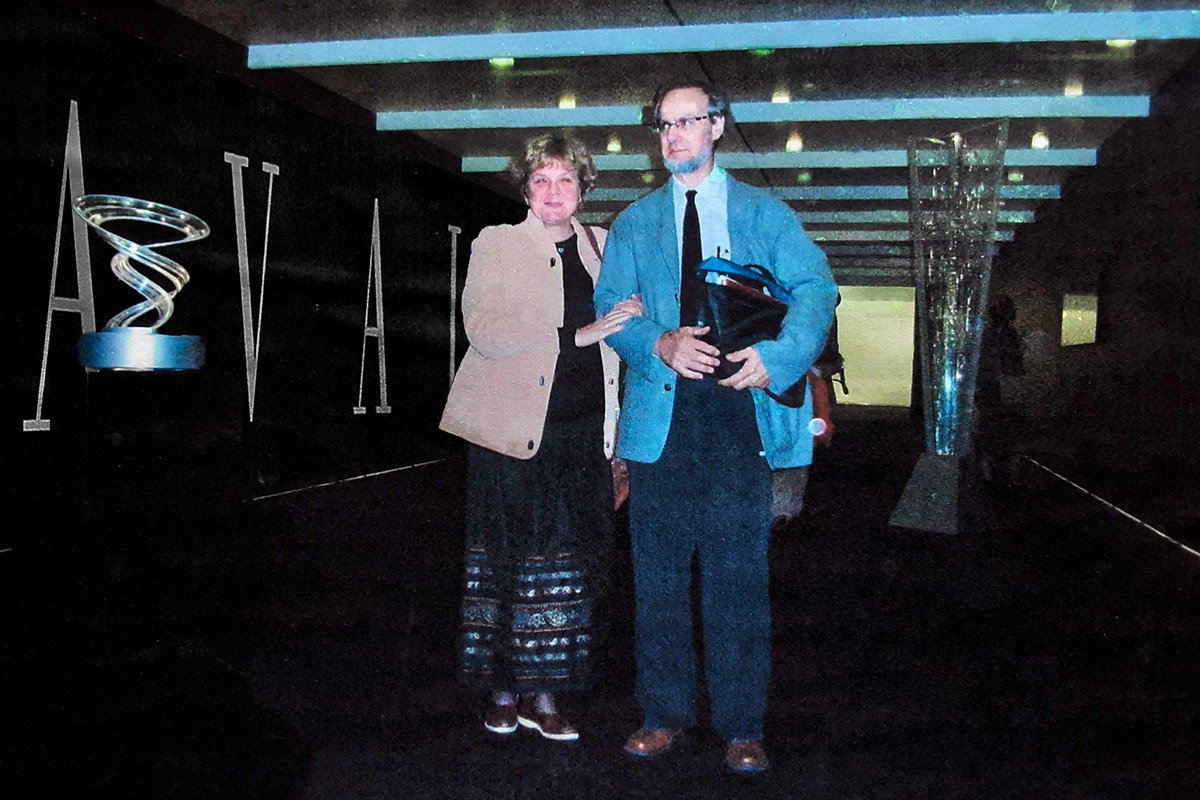 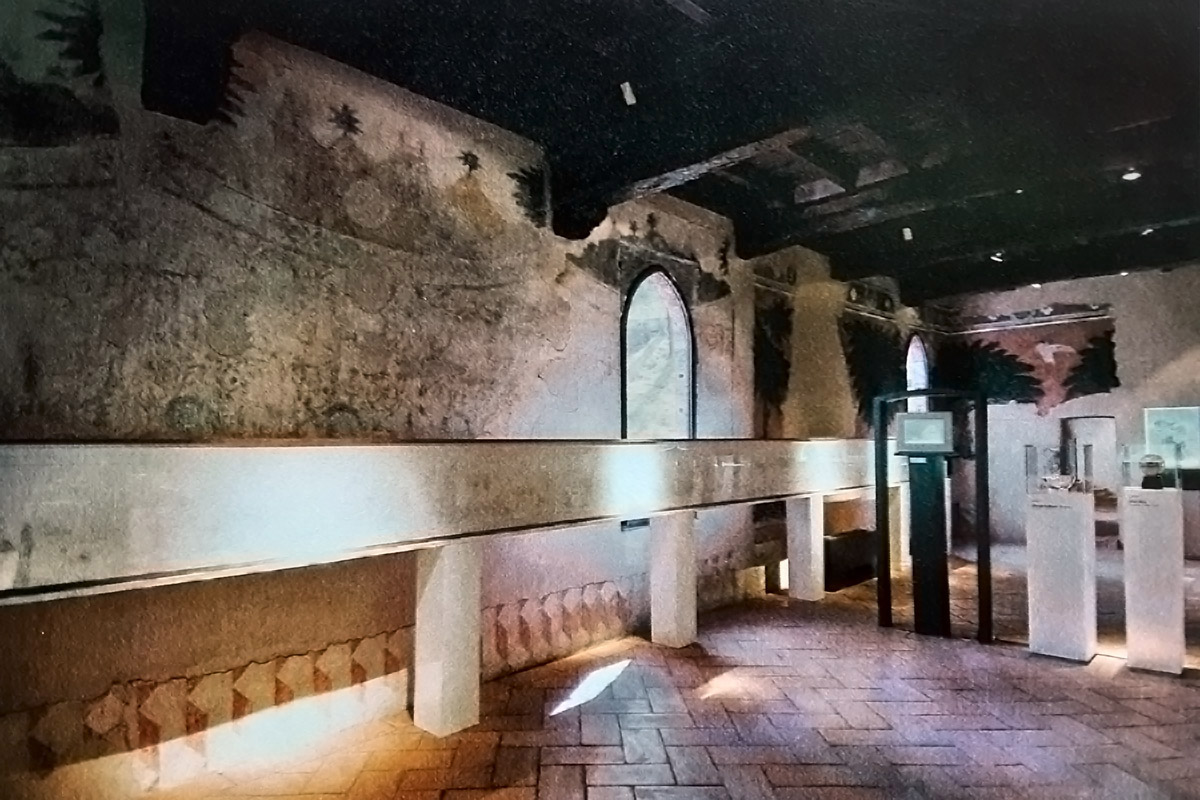 The events of 2020 caused “Last Supper Recall” in Milan to be subjected to a forced “stop and go”, a phenomenon shared by many artistic exhibitions.

Filippo Avalle – House Museum in Brienno, on Lake Como is a project that seeks to make of a crisis an opportunity, by giving visible shape to the artist’s lifelong idea of “Opera Unica” (All One Artwork). The project stems from the renovation of the atelier, strengthened by Avalle’s “theatrical” experience underlying the work in progress inspired by Anna Politkovskaja and then disembarks in the ephemeral but engaging world of social media so that a website can come into being, waiting to welcome its first visitors in whichever way that they will choose to visit it. Let’s hope it be vis-à-vis. 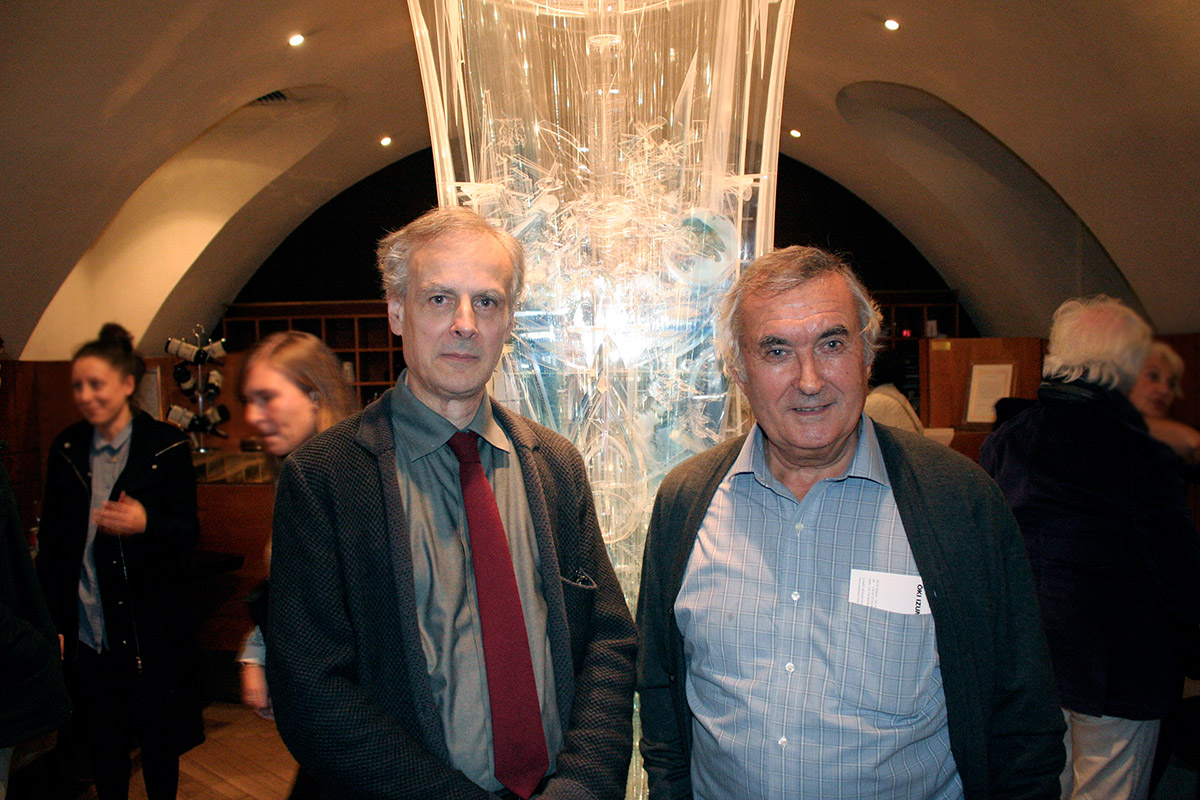 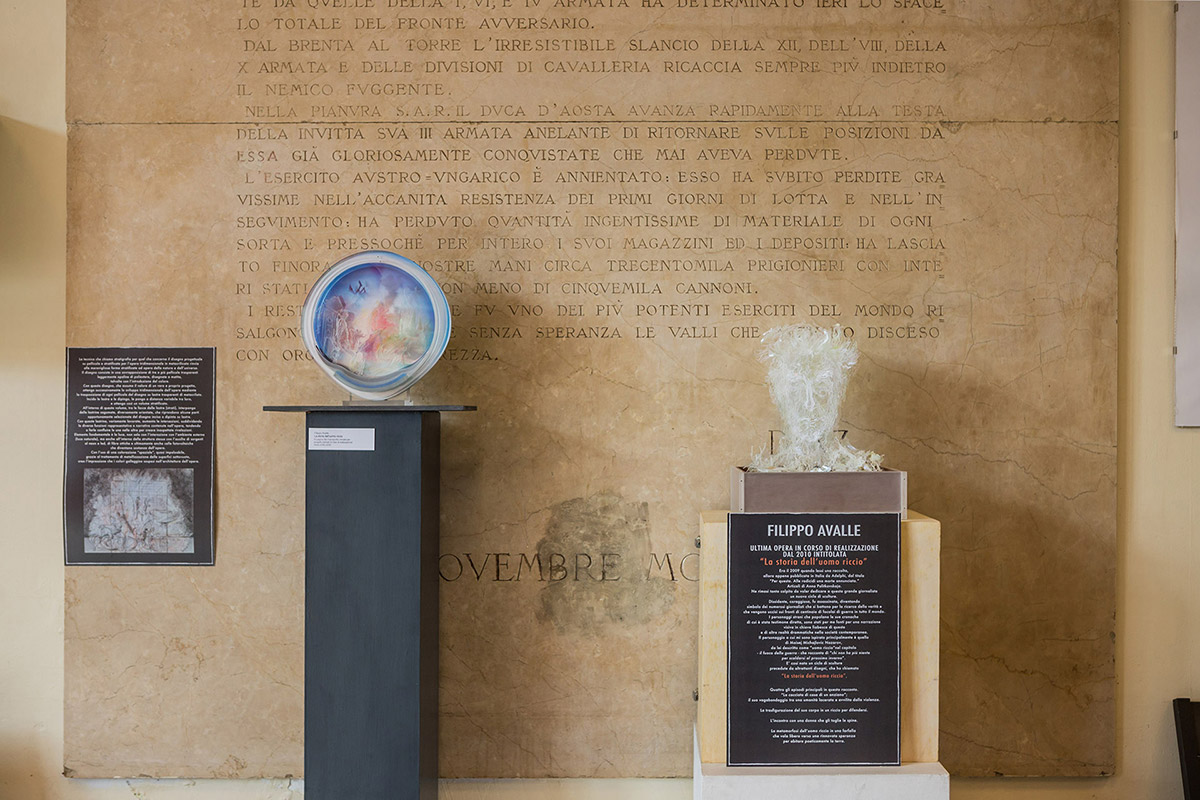 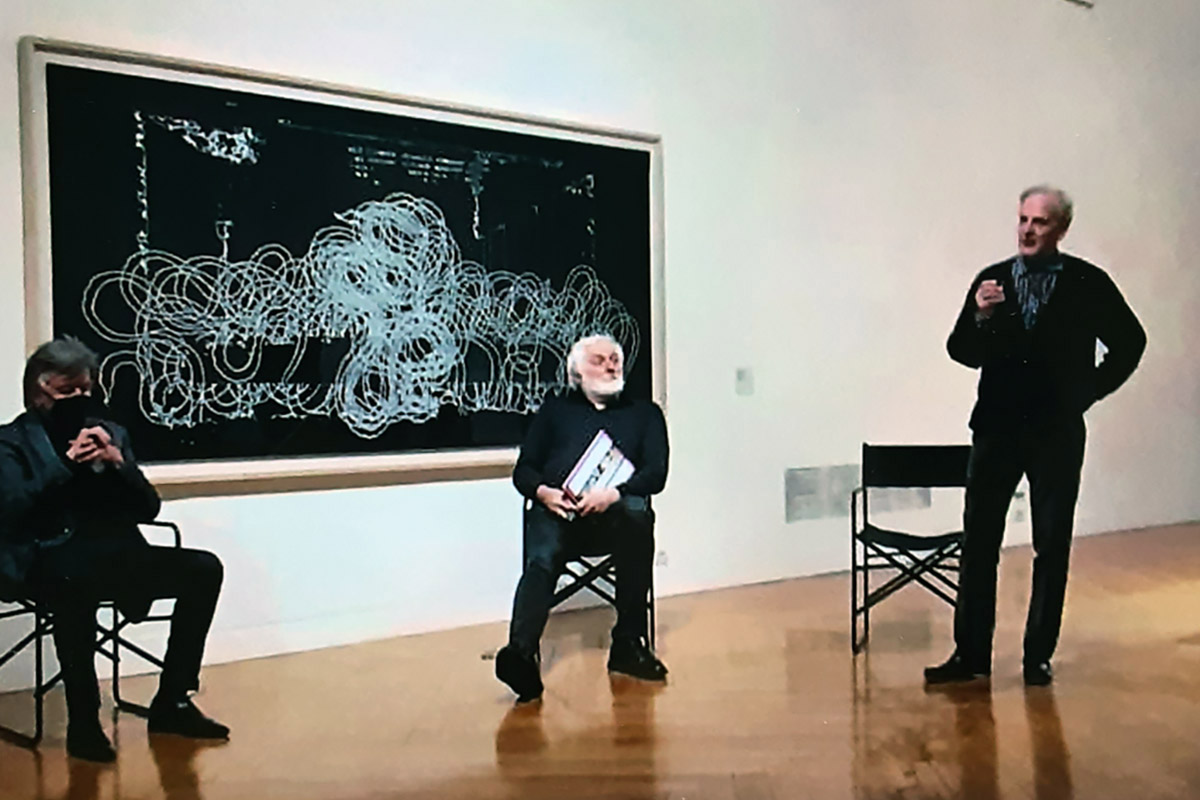